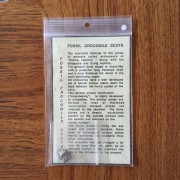 The crocodile belongs to the group of animals called archosaurs, or “ruling reptiles”.  Archosaurs are members of a subclass that also includes dinosaurs, and flying repitles, plus several groups of extinct forms, mostly from the Triassic Period (251 million to 200 million years ago).

There are no reviews yet.