View Cart "FOSSIL KIT WITH SIX FOSSILS" was successfully added to your cart. 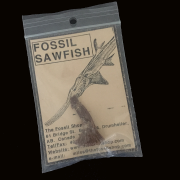 Sawfish have a long slim shark-like body with ventral gill slits, fan shaped pectoral fins attached to the head, and a long snout or rostrum armed with a row of spines called rostral teeth on each outside margin.

Mostly bottom dwellers, the sawfish would rise toward the surface to slash its way through a school of fish, turning to feed on any that were stunned or wounded.The long snout and sharp teeth was also used to probe into sand and mud to dig up shellfish.

The rostral teeth were attached to the outside surface of the long cartilaginous beak by a wide base or root that rested in a shallow groove.

They lived in a warm tropical sea, inhabiting shallow waters and straying into brackish or even fresh water.